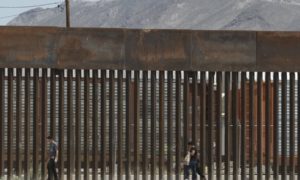 WASHINGTON (AP) — A top U.S. Border Patrol official has a warning: The crisis at the U.S.-Mexico border is not over.

Even though crossings have been down over the past few months and news of custody deaths and teeming facilities full of children and families has faded from front pages and talking points of politicians, the number of migrants coming over border is still high. And resources are still stretched.

Full Coverage: Immigration
“It is kind of a new norm. We’re at risk at any time,” if some recent deterrent efforts are blocked by the courts, like a policy forcing asylum seekers to wait out their claims in Mexico , Brian Hastings, chief of law enforcement operations at Border Patrol said in an interview with The Associated Press.

Immigration has been a top issue since President Donald Trump took office almost three years ago, with Democrats heavily critical of his administration on border conditions. But Washington is now dominated by talk of impeachment and immigration seems somewhat less pressing, with monthly apprehension numbers declining and Mexico and other nations enhancing cooperation with the U.S. on immigration issues.

Still, Trump has not forgotten an issue that was key to his 2016 victory, pointing to it often at public events and at rallies. And as he ramps up his campaign heading into 2020, he’s likely to invoke it often as a measure of his success, telling his supporters that construction is happening on the long-stalled wall he promised along the southern border and that far fewer people are being apprehended crossing the border illegally — if current numbers hold, that is.

Over the budget year that ended Sept. 30, there were 859,510 apprehensions by Border Patrol, plus over 110,000 more encounters of people who tried to enter legally but were deemed inadmissible. There were nearly 1 million crossings from the early 2000s, but those were mostly single men from Mexico who were easily returned, not families from Central America who require much more care.