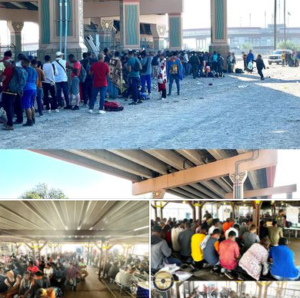 Officials in El Paso County, Texas were set to meet Thursday to form a plan on how to respond to the area’s recent uptick in migrants crossing the border to enter the U.S.

A description of the scheduled meeting said it was “a matter of public necessity” to decide how to address the rise in incoming migrants, with a “significant number” of migrants staying on the street after entering the county and “lacking basic necessities such as food and shelter.” Meanwhile, shelters in El Paso are already “at or nearing capacity,” the meeting description said.

The meeting description identified its purpose as gaining “direction and authorization from the Commissioners Court on reallocating financial resources and other potential County resources to address migrant care coordination with the City of El Paso and other NGO’s.”

El Paso County Judge Ricardo Samaniego told Border Report that officials may move migrants currently staying in the downtown area to the El Paso County Coliseum. Samaniego said many migrants move on to other cities after first arriving in El Paso but that their movement depends on transportation availability, according to Border Report.

The U.S. Border Patrol’s El Paso Sector addressed the recent increase in migrants in a Facebook post earlier this week. Agents with the El Paso Sector have encountered an average of 1,300 migrants each day since the start of this month, the post said.

The White House denounced Republican governors who are sending migrants out of their states to other cities, calling it a “cruel political stunt.”

Jean-Pierre said there is a process in place to legally manage migrants that involve expelling migrants by court order under Title 42, transporting them to ICE custody and detention programs to await further processing.