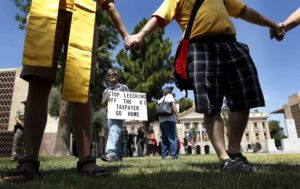 When President Trump announced his presidential campaign in June 2015, he spoke about the need for immigration reform by saying of undocumented immigrants, “They’re bringing drugs, they’re bringing crime, they’re rapists.”

This week troops from the National Guard are sending troops to the U.S./Mexico border and stirring yet up another immigration debate.

How much of the rhetoric and decision-making around immigration is based in fact? And how much is driven by partisan political agendas? And why is it so difficult to make the facts stick, no matter what your politics are on the issue?