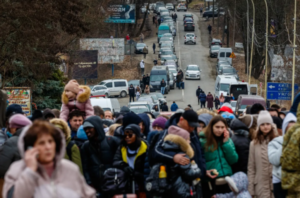 As a Romanian native, Hartford immigration attorney Dana Bucin said she was inspired by television footage of Romanians taking in refugees fleeing war-torn Ukraine, and is now taking action.

“My country is welcoming Ukrainian refugees as we speak,” Bucin said. “I have witnessed a lot of Romanians generously opening their homes and country to these refugees. I have watched these images over and over. I thought I should be doing something.”

Bucin is heading to the Mexican/United States border in San Diego, California to meet with Ukrainian refugees to discuss their legal options to enter into the United States. Along with two other attorneys, Bucin is heading out on Wednesday and will be staying two days. She is offering her services on a pro bono basis.

“Now I get a chance to help them at my border with the U.S. and Mexico,” Bucin said, adding she can continue to help where her Romanian compatriots left off. “Maybe I can manage to get them paroled into the United States.”

Bucin said she is going to help refugees qualify for “humanitarian parole.” Any Ukrainian national who has a US-based sponsor willing to offer housing is legally eligible for humanitarian parole at the border, Bucin explained, although there is a limited window of opportunity for streamlined access before the existing Title 42 policy is rescinded on May 23.

“They are here because they have relatives or very good friends willing to take them in,” Bucin explained.

Bucin said that once they heard about her impending trip, representatives from various Ukrainian churches here have offered housing for anyone who needs it.

Bucin, who also serves as the Honorary Consul of Romania to Connecticut, has been aware of the needs of refugees through partnerships with the League for Defense of Human Rights in Cluj, Romania (LADO Cluj) and the University of Babes-Bolyai’s Romanian Center For Comparative Migration Studies.