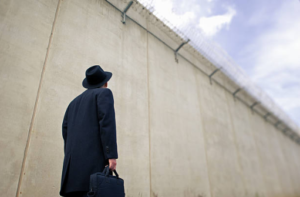 Marty Rosenbluth: ‘This type of work is not something you do. It has to be somebody you are.’

LUMPKIN — Just outside this sleepy southwest Georgia city sits Stewart Detention Center, a sprawling red and gray complex rimmed with barbed wire. The largest immigration detention center east of the Mississippi River with room for 1,900 detainees, it has locked up people from more than 140 countries and nearly every continent.

Yet there is just one immigration attorney permanently based in this isolated part of the state some 140 miles south of Atlanta: Marty Rosenbluth, a 60-year-old former trade union organizer from New York City who bought a little white house here last year.

There is no shortage of work, nor is the work easy. The backlog of federal immigration court cases tops a million nationwide and the judges in Lumpkin deny more than 90 percent of the asylum requests they hear, according to one study.

Rosenbluth feels nervous every time he passes through Stewart’s rattling gates and into the small immigration court inside, where he represents people who say they are fleeing persecution. Bookish and bespectacled, he got a phoenix and a dragon tattooed on his back to feel stronger.

“This type of work is not something you do. It has to be somebody you are,” said Rosenbluth, who earlier did human rights work in the occupied West Bank and represented Syrian refugees in Greece.

Defendants in federal immigration courts have a right to an attorney but at their own expense. Their chances of winning relief increase dramatically when they get lawyers, according to Syracuse University’s Transactional Records Access Clearinghouse, a research group that monitors the federal government. Nationwide, 20 percent of those with attorneys were ordered deported compared to 76 percent without them, according to TRAC figures through September. At Stewart, just 12 percent of detainees have been represented.