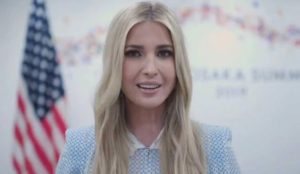 Las Vegas, US: US President Donald Trump’s advisor and eldest daughter Ivanka Trump has suggested a major overhaul in immigration policy that would be more open to welcome high-skilled workers to join the American workforce.
In a keynote session on Tuesday at the ongoing CES in Las Vegas, Ivanka Trump said that the government’s policies should be revised to allow highly educated non-citizens to live and work in the US learning from the policies being followed in other neighbouring countries such as Canada.

This, however, she added, “can’t displace the investment that needs to be made in marginalised, unskilled Americans”.

She said that overhauling the immigration policy would also help the US grow and innovate. “The President says he thinks it’s absolutely insane that we educate immigrants from around the world and just when they’re about to start companies, we throw them out of the country. We need to reach over the sidelines, draw them into our workforce.”

The address by what White House calls President’s advisor is good news for thousands of Indian students studying in various US universities and looking forward to realising their US dream thereafter.

However, concerns about providing jobs to Americans have pushed these aspiring and highly skilled immigrant workers to look at other geographies for a remunerative and productive employment,

The run up to CES keynote by Ivanka Trump has not been smooth with her credentials as a tech expert being questioned by several women in the field.

In her CES 2020 keynote session, titled “The Path to the Future of Work”, Ivanka spoke about the White House’s focus on reskilling workers so they can be ready for the jobs of the future.

But she largely kept herself away from technology and rather focused more on her father’s policy on jobs and what private sector can and should do to re-skill American work force.

Ivanka Trump also co-chairs the American Workforce Policy Advisory Board that’s made up of tech leaders including the CEOs of Apple and IBM.