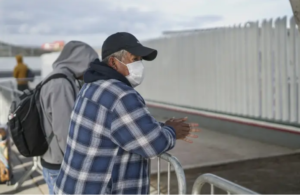 In immigration courtrooms in New York and San Francisco Tuesday, large numbers of judges stayed home from work as their union announced that a judge in Denver had symptoms of COVID-19, the disease caused by the new coronavirus, and in Atlanta an attorney tested positive for the virus — just one day after he appeared in a crowded courtroom.

The move comes as many parties on opposite sides in the nation’s sprawling immigration court system have come together to demand that the Department of Justice temporarily halt court proceedings amidst the global pandemic — something the agency has thus far refused to do.

The agency has said that it is closely reviewing the situation and it has postponed preliminary immigration court hearings across the country. On Tuesday, officials temporarily shut immigration offices around the country because of the virus. But officials have resisted calls to shut the courts as a whole. Such a closure could further exacerbate a booming backlog of more than a million cases — a number that has grown during the Trump administration.

Late Tuesday, the Department of Justice announced it would shut down several courts, including those in New York, Memphis, and Los Angeles. The agency also announced that it would only hold hearings for those currently detained by ICE officials, a significant drawback in caseload.

Courtrooms are not good places to practice social distancing. They are often cramped, with judges, attorneys, family members, experts, and others gathering in close proximity for hearings.

The Department of Justice “has made it clear in recent days that they do not value the health and safety of their own employees, much less the health and safety of DHS counsel, respondents, and respondents attorneys,” said one ICE prosecutor, who spoke on condition of anonymity because they could not comment publicly. “It’s pretty shocking to see. I hope they do the right thing and shut down the courts immediately for the welfare of all involved.”