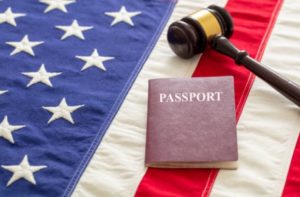 The union representing immigration judges is suing the Trump administration over a policy they say censors judges.

A lawsuit filed Wednesday is the latest escalation in the feud between immigration judges and the Justice Department, which oversees the US immigration court system.

As the administration continues to crack down on immigration to the US, the Justice Department has imposed case quotas to speed cases along, given more power to the director charged with overseeing the courts, reversed rulings, curtailed judges’ ability to exercise discretion in some cases and moved to decertify the union of immigration judges.

Over time, those actions have prompted some immigration judges, some of whom were retirement eligible and had decades of experience, to leave the department.

The policy in question in Wednesday’s lawsuit prohibits immigration judges from participating in public speaking engagements, among other things — a move that the union, represented by Knight First Amendment Institute, argues is unconstitutional.

“Part of the job of an immigration judge is to educate the public about the immigration courts and the role they play in society,” said Judge Ashley Tabaddor, president of the National Association of Immigration Judges, in a statement. “This policy prevents us from doing this critical work, undermining public understanding of and trust in the immigration courts in the process.”

The issue has taken on renewed urgency amid the coronavirus pandemic, as immigration judges who are continuing to oversee some cases “remain silenced,” the lawsuit says.

The Justice Department’s Executive Office for Immigration Review previously allowed immigration judges to speak in their personal capacities, with the caveat that they weren’t speaking on behalf of the agency and with preapproval, which was routinely granted. Judges spoke at schools, universities and bar associations about the immigration courts, the lawsuit says.

But under President Donald Trump, the agency has taken more restrictive steps by implementing additional review procedures and rules that have essentially barred immigration judges from speaking about immigration, among other issues.