Home Court News Immigration Judge Told 2-year-old to be Quiet or a Dog Would ‘Bite You’: report 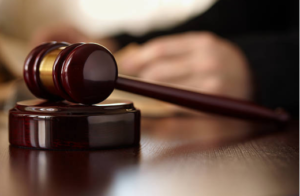 An immigration judge reportedly threatened a Guatemalan child who was making some noise that a “very big dog” would “come out and bite you” if the undocumented immigrant did not quiet down, according to a report by Mother Jones.

The boy was in the courtroom with his mother for an immigration hearing in March 2016 when the threat happened, Mother Jones reported, citing testimony from an independent observer present at the court.

“I have a very big dog in my office, and if you don’t be quiet, he will come out and bite you,” Judge V. Stuart Couch reportedly told the child, according to an affidavit signed by Kathryn Coiner-Collier.

Coiner-Collier was a coordinator for a Charlotte, N.C.-area legal advocacy group that assisted migrants who could not afford attorneys.

“Want me to go get the dog? If you don’t stop talking, I will bring the dog out. Do you want him to bite you?” the judge continued to tell the boy during the hearing, according to Mother Jones.

Couch later asked Coiner-Collier to carry the boy out of the courtroom and sit with him, she told Mother Jones.

The judge reportedly told Coiner-Collier that he had threatened other children but that it appeared not to be working with this particular child.

Coiner-Collier said she immediately wrote the affidavit after the case, and in a message to the mother’s attorney in 2017, she wrote “I have never lost my composure like I did that day. … I was … red in the face sobbing along with [the boy’s mother.]”

Coiner-Collier also accused Couch of turning off the courtroom’s recording device as he threatened the child, whom she described as being 2 years old even though the judge said he was 5.

By Marina Pitofsky for THE HILL
Read Full Article HERE