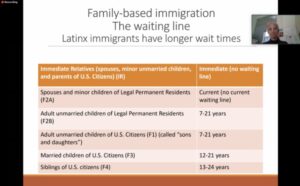 On Oct. 13, the world language and culture studies department hosted the first installment of its three-part “Latinx Communities in Iowa” conversation that featured immigration law expert Ann Naffier and centered around immigration issues facing the Latinx community of Des Moines.

Naffier is a managing attorney at Iowa Justice For Our Neighbors (IowaJFON), a non-profit organization that provides low-income Iowans with free immigration legal council. She has been an immigration lawyer for nine years, having helped hundreds of individuals gain entry into the U.S.

Within her presentation, Naffier an emphasis on the unjust nature of U.S. immigration law. She analyzed the different government policies associated with family-based, employment-based and humanitarian-based immigration.

Naffier went on to detail the negative impact that the Trump administration has had on immigration law. She used Trump’s decision to terminate DACA and TPS (temporary protective status) as examples, among others. Naffier even went as far as to state that “Working in immigration law right now is like working in a tornado” thanks to Trump.

Making a local connection, Naffier was keen to demonstrate how Trump’s anti-immigration policies have had devastating effects on Iowa’s immigrant communities. She pointed out that Trump’s flippant actions have endangered the legal status of more than 2,500 DACA recipients and 1,500 TPS recipients in Iowa.

Likewise, seeing as the World Languages department hosted the dialogue, Naffier made it a point to share how her acquisition of the Spanish language supplemented her career as an immigration lawyer.

By Colbee Cunningham for THE SIMPSONIAN
Read Full Article HERE