Home Federal Enforcement Immigration Is a Political Liability for Biden. But So Is Immigration Reform 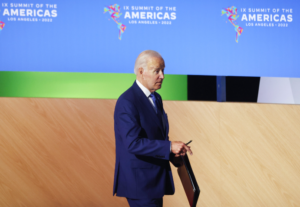 President Joe Biden capped off a rocky Summit of the Americas in Los Angeles last week with a major declaration on migration also signed by 18 Latin American countries and Canada, with hundreds of millions of dollars set to be disbursed to help integrate migrants into countries other than the United States. But the deal’s dearth of initiatives addressing northward migration is unlikely to burnish Biden’s credibility on the topic ahead of November’s midterms and the 2024 presidential election, instead kicking the can down the road when it comes to dealing with the countries of origin of many U.S.-bound migrants.

The administration appears stuck in a bind, experts say, as maintaining the status quo on regional migration means Democratic candidates may get hammered for not reducing border crossings, but most solutions also constitute politically unpalatable choices.

Biden went into the summit with a spate of unresolved problems but little political capital to spend: Voters have been consistently unimpressed with his handling of immigration since he came to office, and the White House has struggled to find a balance of policies that fulfill legal and humanitarian obligations to migrants — a key desire of progressives — without inviting backlash from the broader electorate.

The summit did not end without results: As part of the Los Angeles Declaration on Migration, the United States committed to taking 20,000 refugees from across Latin America over the next two fiscal years, as well as expanding temporary work visa programs. But the declaration was notably most expansive on the provision of pathways to legal status for migrants in Mexico, Canada, Spain, Guatemala and Belize — rather than the United States, where arrivals on the southern border in March and April were at a 22-year high of more than 200,000 people a month.

That was hardly a surprise, according to Brian Winter, the vice president for policy at Americas Society/Council of the Americas and editor-in-chief of Americas Quarterly.