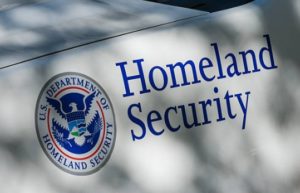 Ken Cuccinelli, an immigration hawk and vocal defender of President Trump’s crackdown on illegal and legal immigration, was installed on Wednesday as the second-highest ranking official at the Department of Homeland Security.

Cuccinelli, who has been leading U.S. Citizenship and Immigration Services (USCIS) since June, was named acting deputy secretary of the sprawling bureaucratic juggernaut, a department now at the center of the Trump administration’s hardline immigration agenda.

In an email to department employees, acting Homeland Security Secretary Chad Wolf, who was also sworn in to his new role on Wednesday, praised Cuccinelli.

“Ken Cuccinelli has been a constant and vocal advocate for the men and women of the Department who are protecting our borders and restoring integrity to our immigration system,” Wolf said in the email.

David Pekoske, the previous acting deputy director, will continue in his Senate-confirmed role as administrator of the Transportation Security Administration (TSA).

In his new role, Cuccinelli will continue to push the administration’s controversial policies designed to deter unauthorized immigration at the U.S.-Mexico border and to severely restrict legal immigration. Since he joined the administration in June, Cuccinelli has become the de facto spokesperson for the department, frequently advocating for Mr. Trump’s immigration agenda and echoing some of the president’s inflammatory rhetoric on television and Twitter.

“With nearly a quarter of a million employees and a mission that ranges from border security and immigration enforcement to cybersecurity and emergency response, DHS is charged with some of the most critical work in government,” Cuccinelli said in a statement. “It’s been a privilege to lead the USCIS workforce these past months in faithfully administering our nation’s lawful immigration system and I look forward to continued collaboration with them.”

As head of USCIS, Cuccinelli unveiled the “public charge” rule that would make it easier for officials to deny green cards and visas to low income immigrants who use — or are likely to use — welfare benefits like food stamps and government-subsidized housing programs.