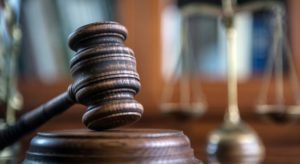 Immigration groups are suing the Trump administration over its refusal to close immigration courts during the coronavirus public health crisis.

In a lawsuit filed on Monday, the groups said that the Department of Justice Executive Office for Immigration Review’s (EOIR) failure to suspend immigration hearings amid the pandemic puts migrants, their attorneys and government personnel at risk.

They urged the U.S. District Court in D.C. to step in and block the agency from holding in-person hearings for the duration of the public health crisis. On Tuesday, the case was assigned to Judge Carl J. Nichols, who was appointed to the court by President Trump.

The suit was filed by the National Lawyers Guild, the American Immigration Lawyers Association and the Immigration Justice Campaign on behalf of four detained clients.

A spokeswoman for Immigration and Customs Enforcement, which was also named in the lawsuit, said “ICE makes custody determinations every day on a case-by-case basis, in accordance with U.S. law and Department of Homeland Security (DHS) policy, considering the merits and factors of each case while adhering to current agency priorities, guidelines and legal mandates.”

“When making such decisions, ICE officers weigh a variety of factors, including the person’s criminal record, immigration history, ties to the community, risk of flight, and whether he or she poses a potential threat to public safety,” the spokeswoman added. “ICE also routinely makes custody re-determinations of those in detention, based on individual circumstances, and may release detainees onto alternatives to detention (ATD) and other monitoring programs, for a variety of reasons.”

According to the lawsuit, ICE is requiring immigration lawyers to bring their own personal protective equipment such as gloves and masks in order to meet with their clients.

BY HARPER NEIDIG for THE HILL
Read Full Article HERE