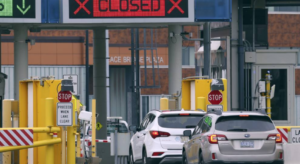 President Trump plans to seal off the U.S-Mexico border to migrants under a law intended to protect the country from communicable disease — a move that comes as the U.S. immigration system grinds to a halt in response to the growing coronavirus pandemic.

At a press conference Wednesday, Trump said the southern border would not close completely. But the move would allow the administration to quickly deport asylum-seekers and other migrants who cross the U.S.-Mexico border illegally without due process.

Meanwhile, the U.S. and Canada have agreed to close their mutual border to all “non-essential” traffic, following earlier restrictions imposed by the Trump administration on travel from Europe and China.

The dramatic developments on the northern and southern borders come as immigration is being curtailed in other ways, too.

U.S. Immigration and Citizenship Services, the agency in charge of processing green card and citizenship applications as well as conducting asylum interviews,is closing its field offices to the public. Immigrants fighting deportation are having their cases postponed as some immigration courts are limiting dockets and others are closing. Refugee resettlement is temporarily suspended as well, according to the United Nations, because of the Coronavirus pandemic.

There are about 100 confirmed cases of COVID-19 in Mexico, and about 600 in Canada, compared to nearly 8,000 cases in the United States.

Immigrant advocates accuse the Trump administration of exploiting the pandemic to advance its crackdown on asylum-seekers, and the partial closure of the southern border where thousands have amassed in Mexico is sure to draw legal challenges.

“President Trump has been falsely scapegoating immigrant communities in the name of public safety since he came into office,” said Michelle Brané at the Women’s Refugee Commission. “This rule would unquestionably violate both domestic and international law and is an abdication of our moral responsibility to protect vulnerable people.”