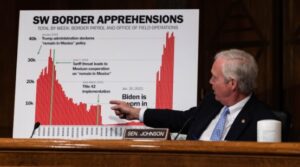 Immigration experts on Thursday said that a chart used by two Republican senators during a hearing on migrant interactions misrepresented the number of immigrants detained at the border between the spring of 2020 and early 2021.

The experts said that the data showed on the lawmakers’ charts exaggerated the magnitude of the surge in apprehensions after President Biden’s inauguration.

The graphic showed apprehensions of immigrants plummeting shortly after the Trump administration ordered quick expulsions of migrants due to the pandemic, a process known as Title 42

And while border encounters and apprehensions did plummet at that point, DHS stopped counting Title 42 arrests and expulsions as “apprehensions,” skewing the numbers in comparison to those prior to March 2020.

“How deceptive was the chart that @RonJohnsonWI and @SenatorRomney displayed at today’s hearing on migrant children?” wrote Reichlin-Melnick. “I mapped out the missing data to show you what the chart ‘mysteriously’ left out-a trend of rising border encounters that began months before Biden took office.”

Reichlin-Melnick’s annotated chart shows discrepancies ranging between 3,991 uncounted apprehensions in March 2020, to 17,713 in January 2021, a steady incline toward the border apprehension levels seen under the Biden administration.

Without the Border Patrol encounters charted by Reichlin-Melnick, Johnson’s chart shows a much steeper surge.

“I often say the first step in solving any problem is admitting you have one. And it just seemed like we’re an utter state of denial,” Johnson said, pointing to the chart, adding that “it’s galling quite honestly to hear that this is a crisis inherited by this administration.”