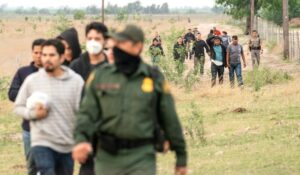 The immigration-court equivalent of an indictment in the criminal context is called a Notice to Appear. When illegal aliens are apprehended at the southern border, they are usually issued an NTA, and so if they don’t appear for the hearing, they can be ordered deported in absentia.

But sometimes the flood of illegals responding to Biden’s “La Invitacion” has been so overwhelming that border agents are basically Lucy in the chocolate factory, without the time even to issue NTAs. In that case, they simply print out a “notice to report,” giving the illegals 60 days to turn themselves in to an ICE office in the interior, and dropping them off at the bus station. This is essentially immigration enforcement by the honor system.

This might prompt one to ask, how many of these people actually show up and turn themselves in to ICE? Stephen Dinan at the Washington Times reports that DHS Secretary Mayorkas was asked just that at two Senate hearings in May. At the first hearing, Mayorkas said the rate of such people reporting to ICE was “high,” and two weeks later he told lawmakers it was “very, very high.”

Secretary Mayorkas appears to have lied to Congress.

Interestingly, while the Biden administration has prohibited ICE from even questioning virtually all illegal aliens, it has said those who entered after November 1, 2020, are priorities for arrest and deportation. And, in fact, Mayorkas told senators that “individuals who do not appear are a priority of ours for apprehension in the service of border security.”