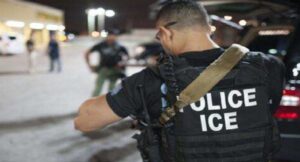 The Department of Homeland Security and U.S. Immigration and Customs Enforcement announced Wednesday that a statewide enforcement operation that wrapped up last weekend resulted in the arrests of more than 125 immigrants across California, nearly 100 of them in the Los Angeles area.

The enforcement effort, dubbed “Operation Rise,” took place from Sept. 18 to Oct. 3, and “targeted aliens subject to removal who were arrested for crimes but were released by state or local law enforcement agencies, despite having active immigration detainers in place,” a DHS statement said.

More than 95% of those arrested during the operation that targeted so-called sanctuary cities had criminal convictions or pending criminal charges, according to the DHS.

“Unfortunately, certain local politicians, including many in California continue to put politics over public safety,” said Acting Secretary of Homeland Security Chad Wolf. “Instead of fulfilling our shared mission to protect our communities, they would rather play politics with the law by enacting so-called Sanctuary City policies to the detriment of our country’s safety. Operation Rise is proof-positive that we will never back down from enforcing the rule of law, with or without the cooperation of local politicians.”