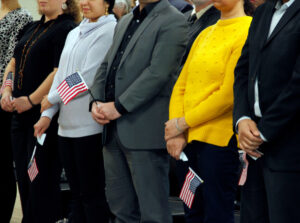 The 2020 census results revealed the slowest U.S. population growth since the Great Depression, prompting advocates and policy experts to ramp up efforts on Capitol Hill for changes to the U.S. immigration system.

The slow growth rate, coupled with an aging population and declining birth rates, could have long-term economic impact in the United States. Changes to the immigration system, including efforts to attract more permanent residents and young foreign-born graduates, may be the solution, they’re telling lawmakers.

“We encourage Congress and the Biden Administration to pursue policies that expand avenues to immigration for our continued prosperity, and to create new jobs across the country,” Todd Schulte, president of FWD.us, a pro-immigration group, said in a statement.

The organization was one of several to release a report or policy brief calling for increased immigration to counteract demographic decline.

The National Immigration Forum in its report warned that if the trend continues, the U.S. could see devastating economic consequences — including a depletion of Social Security funds, less tax revenue from fewer working-age residents, and critical labor shortages, particularly in rural areas.

“There’s increasing consensus that immigration really has to be part of the response here,” said Danilo Zak, the forum’s senior policy and advocacy associate and co-author of the report calling for expanded immigration in response to the latest census data.

The Migration Policy Institute, a nonpartisan think tank, also released a policy brief in the wake of the release of census results, partly blaming the declining population growth on congressional inaction on immigration for decades.

While the U.S. may be facing a number of other urgent issues, an aging American workforce and labor shortages “make reforming the legal immigration system an equally pressing issue,” the brief concluded.

The issue was raised to lawmakers on the House Judiciary Committee’s immigration panel during a hearing focused on “barriers to legal immigration.”