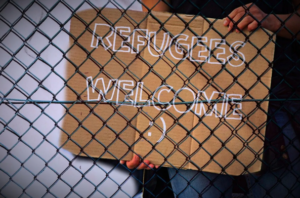 As I think of all the wonderful celebrations in honor of refugees that took place around the world, a particular song from my childhood comes to mind:

I remember singing along to this song from everyone’s favorite educational TV show for children many years ago in Nigeria. In the 70s, 80s, and 90s, African children grew up embodying early lexical learning from Sesame Street. The show offered a glimpse into the lives of children in the United States, and was culturally and socially relevant, serving as a strong reference point for all things American.

The show also aided the African child with establishing an understanding of the American culture, through the experiences of American young children interacting with Muppet characters and adults – displayed on our TV screens.

Quite sadly, the same could not be said about the similarity in the actual representation of cultures from countries in Africa on TV shows aired in the United States at that time, or even today. American children were not given the same privilege to understand true African culture, over time creating a knowledge deficit, as is seen singularly with the reference to Africa as one country.

This lack of representation would subsequently cause a misunderstanding of refugees and immigrants from that region, who are among the highest seekers of residency in America. Furthermore, new Americans would have their identity partially erased while attempting to navigate a new culture, resulting in a dichotomous experience, where one group knows much more about the other than they do about us.

Arguments gleaned from author Samuel Huntington’s book: “Who Are We? The Challenges to America’s National Identity,” show a fear of the erosion of the American identity, due to multiculturalism, and the cultural immersion of immigrants into American society.