Home Resources IMMIGRATION DETENTION IS PART OF MASS INCARCERATION: THE CASE FOR ABOLISHING ICE AND EVERYTHING ELSE 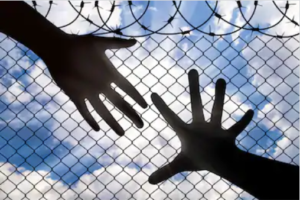 NOT MANY PEOPLE besides immigration law wonks had probably heard of “Section 1325,” before Julián Castro called for repealing it during the first Democratic presidential primary debate this summer. The law in question makes it a federal crime to enter the U.S. without permission — turning an immigration offense into a criminal one. President Donald Trump used a policy of “zero tolerance” for breaking that law to justify separating families at the border, but under George W. Bush and Barack Obama before him, 1325, along with illegal reentry — coming back after being deported — was already being used to jail and deport more and more immigrants. In fact, immigration-related crimes now make up the majority of all federal criminal prosecutions.

Castro’s proposal to repeal 1325 might have seemed to come out of left field, but it’s the exercise of the law that is historically the outlier: While laws criminalizing entry have existed since 1929, they “were largely ignored for a century,” the lawyer and scholar César Cuauhtémoc García Hernández reminds us in a new book, “Migrating to Prison: America’s Obsession with Locking Up Immigrants.” In 1975, he noted “a mere 575 people” were charged with an immigration crime; in 1993, only 2,487. Contrast that with fiscal year 2018, when prosecutors brought 105,692 federal immigration charges.

The criminalization of immigration, especially the scale at which it happens now, is a relatively recent trend, Hernández argues. And it ought to be reversed. His book joins a number of recent works that put contemporary immigration politics in the same light that scholars and activists have shone on mass incarceration — showing it to be a phenomenon inextricably linked to the history of land, race, and capitalism in the United States. “The immigration prison is a reminder that human bondage based on racial and economic markers of undesirability can’t be relegated to some distant past,” Hernández writes. “If we’re willing to lock people up, we’ll find a reason. Most of the time the targets will be people of color. We can call this coincidence, but we would be lying to ourselves.”

By Cora Currier for THE INTERCEPT
Read Full Article HERE