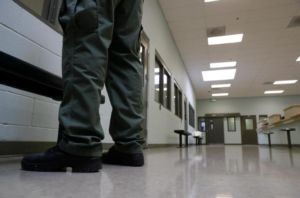 The Adelanto facility is an extreme example of how the U.S. government’s use of guaranteed minimum payments in contracts with private companies to house immigrant detainees might have a potential financial downside. In these contracts, the government commits to pay for a certain number of beds, whether they’re used or not.

The government pays for at least 1,455 beds a day at Adelanto, but so far this fiscal year reports an average daily population of 49 detainees. Immigrant advocates say the number of detainees at Adelanto is currently closer to two dozen because authorities can’t bring in more migrants under a federal judge’s 2020 pandemic-related ruling.

The U.S. government pays to guarantee 30,000 immigration detention beds are available in four dozen facilities across the country, but so far this fiscal year about half, on average, have been occupied, according to Immigration and Customs Enforcement data. Over the past two years, immigration detention facilities across the United States have been underutilized as authorities were forced to space out detainees — in some cases, such as at Adelanto, by court order — to limit the spread of COVID-19.

“The government is still paying them to keep the facility open,” said Lizbeth Abeln, deportation defense director at the Inland Coalition for Immigrant Justice in Southern California. “It’s really concerning they’re still getting paid for all the beds every single day. It’s empty.”