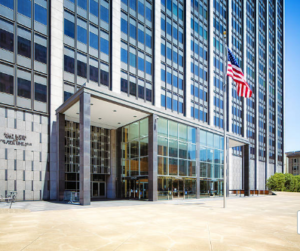 A key cog in President Trump’s feared deportation machine — the immigration courts in New York City — is understaffed, overworked and facing a worst-in-the-nation backlog of cases.

The situation in immigration courts at 26 Federal Plaza is so dire that judges are sharing staffers who work in hallways, surrounded by piles of paperwork. Jurists are limited to two in-person interpreters per day, meaning that asylum-seekers often detail traumatic experiences in their home countries through an interpreter working for a call center.

“It’s sort of a ridiculous situation we find ourselves in,” Immigration Judge Amiena Khan said, speaking to the Daily News in her capacity as executive vice president of the National Association of Immigration Judges.

“We are under-resourced. Judges have always been asked to do more with less. Now, we’re being made to do more with absolutely nothing… It’s a system that is slowly being overwhelmed,” said Khan, who added that immigration judges face an impossible quota of 700 completed cases per year.

Efforts are underway to address the city’s backlog of 116,828 immigration cases, which is the largest facing any city in the country. The General Services Administration, which manages federal buildings, confirmed six new immigration courtrooms are under construction at 290 Broadway. The building is also home to offices for the Environmental Protection Agency and the Internal Revenue Service.

[More New York] Teen mourns loss of mom, siblings in Queens house fire »
The Executive Office of Immigration Review, which oversees immigration courts, said efforts to improve efficiency are already paying off. More cases have been completed in 7 1/2 months of fiscal year 2019 than in all of fiscal year 2015 and 2016, a spokesman said.

“EOIR continues to make great progress in restoring its reputation as a fully functioning, efficient, and impartial administrative court system capable of rendering timely decisions consistent with due process. We are aggressively working to strengthen and improve the functioning of our immigration court system by hiring additional judges and support staff, implementing performance measures and completion goals long recommended by multiple agencies, increasing the use of video-teleconference capabilities, and launching electronic filing,” the spokesman said.