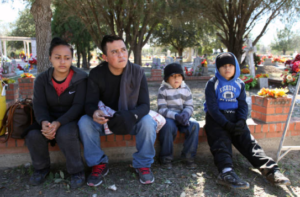 Washington — Immigration courts along the U.S.-Mexico border are postponing certain cases to accommodate and fast-track hearings for asylum seekers placed in the controversial “Remain in Mexico” program. Officially known as the Migrant Protection Protocols (MPP), the program has required tens of thousands of migrants to wait in Mexico while their asylum claims are processed in the U.S.

The Executive Office for Immigration Review (EOIR) — a branch of the Justice Department that oversees the nation’s immigration courts — confirmed on Friday that it is prioritizing hearings for migrants returned to Mexico under the program over other immigration cases. The office is treating their hearings as if they were detained by the U.S. authorities because those cases must be expedited, per EOIR policy.

Typically, migrants in the program wait in Mexico for months to enter the U.S. just for their court dates and are not technically in U.S. government custody.

“MPP cases are, for prioritization purposes, treated as though they are detained, so some non-detained cases are being reset,” an EOIR spokesperson told CBS News, adding that the agency “is shifting resources as necessary in order to to address MPP cases as expeditiously as possible.”

“We continue to expand our capacity for hearing cases through more immigration judge hiring and implementation of additional efficiencies,” the spokesperson added.

The news comes after several attorneys working in the El Paso area told CBS News that their non-MPP cases were recently postponed. The sector is one of a handful of highly transited areas along the southern border where “Remain in Mexico” has been implemented. The policy is also in place in the border sectors near San Diego and Calexico, California and in the Texas border cities of Brownsville and Laredo.

Attorneys and advocates said the move by the courts can have mixed consequences for different migrants. By tasking more judges to preside over “Remain in Mexico” hearings and prioritizing them, the change will likely mean that MPP claims will move more quickly — but at the expense of other cases.