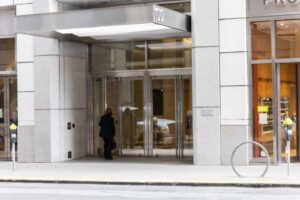 WASHINGTON — Last June, the San Francisco Immigration Court quietly tested a new idea: Fast-track the cases of immigrants whose mail wasn’t reaching them. In the trial run, 80% of the immigrants scheduled were ordered deported for not showing up.

Top officials were effusive with praise over the results, emails obtained by The Chronicle show, and rushed to set up more hearings: “Very positive!” emailed one of the top supervising immigration judges overseeing the nation’s hundreds of courts.

The newly uncovered emails reveal that the fast-track docket for immigrants with returned mail, which was first reported by The San Francisco Chronicle last fall, was cheered at the highest levels of the courts and pursued with full awareness that scores of immigrants would likely be ordered deported as a result.

Advocates and attorneys for immigrants raised concerns about the practice as a sort of deportation conveyor belt last year, as many of the lawyer-less immigrants may have no idea they missed a court hearing, much less that they were ordered deported during it, because they didn’t know how to update their address with the court or thought that Immigration and Customs Enforcement would do so on their behalf. The immigration courts are run by the Justice Department, with judges hired and ultimately overseen by the attorney general.

The emails were obtained through a Freedom of Information Act request by a nonprofit watchdog group, American Oversight, prompted by The Chronicle’s reporting. The group shared the records with The Chronicle.

The Department of Justice declined to comment specifically on the emails, noting that removal orders for failing to appear in court are legally valid and that issuing notices with new hearing dates gives unreachable immigrants an opportunity to appear in court and avoid a deportation order.