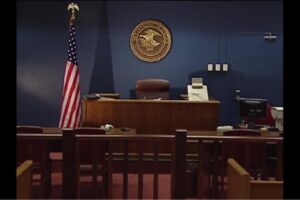 The backlog is almost equivalent to the size of Philadelphia’s population, the clearinghouse found in its latest study.

Immigration courts, which fall under the Justice Department and decide whether to deport immigrants, have been bogged down over the years as more cases are added to the docket than can be addressed at any given time.

“DOJ has prioritized its law enforcement functions over the immigration courts. The result is bad management, under-budgeting, and a gigantic and growing case backlog,” she added.

Cases have been piling on faster than judges can keep up, resulting in the largest increase on record last quarter. From October to December 2021, the immigration backlog increased by almost 140,000 cases, according to the Transactional Records Access Clearinghouse.

“These findings suggest that the Immigration Courts are entering a worrying new era of even more crushing caseloads — all the more concerning since no attempt at a solution has yet been able to reverse the avalanche of cases that Immigration Judges now face,” says the study, released Tuesday.

Among the contributing factors to the sudden increase is the coronavirus pandemic, which resulted in some court closures, and the arrival of thousands of migrants at the US-Mexico border who, if allowed in the US, are provided court dates to make their claims of asylum. Experts have also pointed to management of dockets and the shuffling around of cases, which can disrupt their pace.