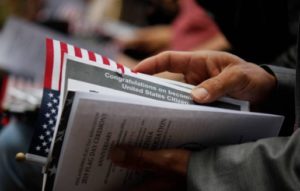 A bill to ban sanctuary policies by most public agencies in Kentucky won state Senate approval Tuesday after a debate that offered starkly different portrayals of the contentious immigration measure.

The Republican-dominated Senate passed the bill on a 28-10 vote following a debate lasting more than an hour. The measure now goes to the GOP-led House.

Opponents countered that the bill isn’t needed. They noted that Kentucky has no sanctuary cities and that law enforcement cooperation already exists.

“What this bill will do is strain the resources of our local cops,” Senate Minority Floor Leader Morgan McGarvey said in opposing the measure. “They’re not trained in immigration law.”

Carroll, a Paducah Republican, responded that the bill would not lead to a “rush” of mass roundups of undocumented people in sweeps involving Kentucky law enforcement.

“They do not have the time nor the manpower to go out and start pro-actively enforcing immigration law,” he said. “There is no expectation that they do that.”

He called the bill a preemptive step to prevent sanctuary policies from gaining a foothold.

“Does it not make sense that for once we get in front of something?” Carroll said. “And we set a standard, we set an expectation. We don’t wait for a city to declare themselves as a sanctuary city and give harbor to criminal aliens.”

Two Senate Republicans — Tom Buford and Alice Forgy Kerr — joined most of the chamber’s Democrats in voting against the Kentucky bill.

While immigration is a hot-button issue nationally, the bill’s supporters portrayed the measure as a law enforcement issue. But McGarvey, a Louisville Democrat, said it runs counter to Kentucky’s tradition of welcoming immigrants.

“It sends a signal that the welcome sign isn’t on,” he said.