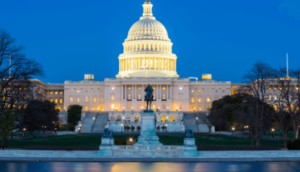 A bipartisan bill to ease green card access for legal immigrants is on track to reach the House floor next week, a rare bit of traction for immigration legislation as thornier debates continue.

Democratic leaders are lining up votes on H.R. 3648, a proposal from Reps. Zoe Lofgren (D-Calif.) and John Curtis (R-Utah) to phase out per-country caps for employment-based green cards and lift annual caps on family-based green cards, according to an aide familiar with the discussions. Majority Leader Steny Hoyer (D-Md.) said the bill is on the House’s agenda next week.

Many lawmakers have touted the bill, which has broad bipartisan support, as a way to streamline green card access for highly skilled immigrants and meet employer demands in the US. The effort is less politically volatile than fraught negotiations on undocumented immigrants and border security, although its Senate prospects are uncertain.

Immigrants have requested the changes for years to address staggering backlogs in the US visa system, though many disagree over whether removing the per-country caps is the best approach. The caps on employment visas have an outsized impact on immigrants from India and China, who often must wait decades to get a green card.

Sens. Kevin Cramer (R-N.D.) and John Hickenlooper (D-Colo.) on Tuesday said they hadn’t coordinated with their House colleagues on moving the bill during the lame-duck period. Congress is working through several major packages in the final days of the session, including a government funding deal, a defense policy bill, and marriage equality legislation.

The Senate passed a similar proposal under unanimous consent in 2020, but couldn’t reconcile it with a House version before the congressional session ended. Cramer said he’d like to see the bill again move through the fast-tracked unanimous consent process in the Senate, but was open to pushing other options.