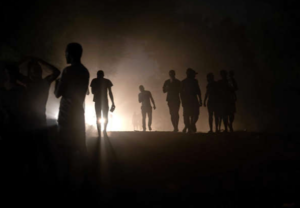 Immigration attorneys are calling for an investigation into the Houston asylum office for its “egregious record” screening asylum seekers, according to an official complaint filed with the Department of Homeland Security Office of Civil Rights and Civil Liberties.

In the complaint, filed Wednesday by 10 state and national immigrant rights groups, the Houston asylum office is accused of denying some immigrants legal orientation, rare language interpreters and access to counsel during preliminary asylum screenings and treating the screenings in an unnecessarily adversarial way.

The Houston asylum office performs a large share of these screenings – 67 percent of all credible fear interviews nationwide from 2014 to early 2019, according to a U.S. Government Accountability Office report.

Critically, the threshold for passing a credible fear interview is relatively low – a migrant must show “significant possibility” that they “could establish eligibility for asylum,” according to the Immigration and Nationality Act.

“It’s by design, a very lenient standard,” said Victoria Neilson, attorney for the National Immigration Project of the National Lawyers Guild, one of the organizations filing the complaint.

“It’s supposed to screen out claims where there’s clearly no merit,” she said.