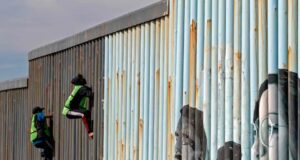 U.S. authorities made more than 69,000 arrests and detentions last month along the border with Mexico, a 21 percent increase from September and the highest total for any October since 2005, according to U.S. Customs and Border Protection figures released Thursday.

The increase was partly fueled by a soaring number of repeat arrests along the border resulting from the Trump administration’s practice of quickly “expelling” people to Mexico after they enter the country illegally.

CBP officials insist the expulsions are a crucial public health measure to prevent the additional transmission of the coronavirus inside the United States, but many of those sent back across the border are trying to enter again and again, without risk of detention and criminal prosecution. The most recent figures indicate that at least one-third of those taken into custody each month are repeat offenders.

Mark Morgan, the acting commissioner of CBP, once more used his monthly enforcement briefing to depict border crossers as selfish and unconcerned for the welfare of U.S. agents and the American public.

It was an argument similar to the one made by those who have urged a national mask mandate, which President Trump has opposed. But Morgan said the migrants present a unique threat because of their lack of masks and the cramped conditions in which they travel to the border.

The acting commissioner blamed the economic impacts of the pandemic for the latest increase in border crossings, as well as President-elect Joe Biden’s stated plans to reverse many of Trump’s immigration policies. “Anticipated shifts in policy are creating new pull factors,” Morgan said, referring to the mix of incentives that typically motivate people to make the journey north.