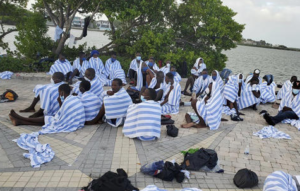 More than 280 immigration, faith-based and rights groups sent a letter to the Biden administration on Friday asking it not to send Haitian migrants interdicted at sea to Guantanamo Bay or a third-party country.

The groups were responding to a Sunday report by NBC News that the White House’s National Security Council had asked the Department of Homeland Security to model scenarios in case of a surge of Haitian migrants.

Fuel supplies in Haiti are currently blocked, and officials said the Biden administration believes that when Haitians are again able to buy gas, there could be a mass exodus of migrants trying to make the dangerous journey to the U.S. by boat.

The scenarios would estimate when the number of Haitians fleeing the country by sea would require sending them to a third-party country for processing, and also at what point that country would be overwhelmed and the U.S. would need to double capacity at the existing migrant facility at its Navy base in Guantanamo, Cuba.

The groups who signed the letter, led by the Haitian Bridge Alliance, urged the Biden administration to instead allow Haitians to be removed from dangerous vessels at sea and taken to the U.S. to claim asylum.

“We call on your administration to prioritize protections for Haitian nationals. This includes halting returns and expulsions to Haiti given the life-threatening conditions there. The administration must not under any circumstances send asylum seekers and migrants to the notorious Guantánamo Bay or other offshore detention locations,” the groups said.

The letter said sending migrants to the Migrant Operations Center at Guantanamo Bay, which operates separately from the prison for suspected terrorists, would repeat policies of the 1990s that kept migrants in poor conditions. Reports from the time, which are cited in the letter, included migrants being given cardboard boxes rather than cribs for their babies to sleep.