Home Uncategorized Immigration and Naturalization in the Western Tradition 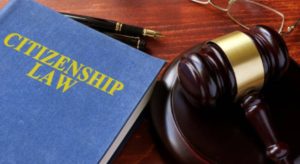 Congress passed its first naturalization law 228 years ago on March 26, 1790. The Naturalization Act of 1790 was the most open naturalization law in the world at the time, allowing free white persons of good character to naturalize after two years of residence in the country and one year of residence in a particular state. Denying citizenship to American Indians, free blacks, indentured servants, and others who did not count as free white persons was a great injustice, but the 1790 Act was an improvement over other countries at the time that also limited naturalization based on gender, skill, or religion in addition to race. Although the Naturalization Act of 1790 did place some restrictions on who could become a citizen, it placed no restrictions on who could enter the United States. The Supreme Court largely corrected Congress’ error in 1898 in its United States v. Wong Kim Ark decision when it ruled that children of immigrants, including non-whites, were also citizens if they were born in the United States.

The Western world had a long legal, social, and ethical tradition of openness to immigrants and naturalization that culminated in some of the best portions of the American immigration system. Hillsdale College history professor Bradley J. Birzer wrote a wonderful essay for The American Conservative in January that showed that our civilizational heritage is replete with relatively open borders and the unencumbered movement of people across them with few practical restrictions, with the United States as a recent inheritor of such thought. Although Greeks and Romans both had liberal migration systems, there were important distinctions between Roman and Greek practices of naturalization and citizenship. The American Founding Fathers decidedly favored a model close to that of the Romans over that of the more restrictive Greeks.

Archaeologist John R. Hale of the University of Louisville wrote, “[u]nlike many of its neighbors, Athens eagerly welcomes foreigners from overseas, whether Greek or ‘barbarian,’ and encouraged them to settle down as residents. So tolerant did the Athenians become that they permitted foreign merchants to build shrines to their own gods within the walls of the Piraeus.” Resident foreigners in Athens were called metics and had to pay a special tax called a metoikion. Metics could not own real estate or participate in politics but they could work, amass wealth, and be productive members of the Athenian economy. Athens was the seat of ancient philosophy for several centuries, but many of its most famous philosophers were foreign-born including Aristotle, Anaxagoras, and Zeno. Aristotle and Cephalus, whose mansion Socrates visits at the beginning of The Republic, are two of the most famous metics.