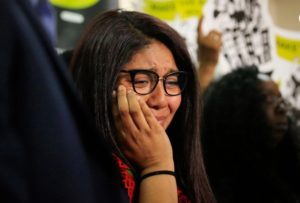 They were scorned on the Fourth of July.

City pols on Wednesday demanded the release of Brooklyn grandparents who were arrested by immigration agents while trying to visit their son-in-law at Fort Drum Army base on Independence Day.

“There should be a moral outrage from shore to shore of what’s happening in this country. We’re arresting seniors who wanted to visit their family on July 4th now?” said Councilman Francisco Moya at a press conference with immigrant advocacy organization Make the Road.

Concepción Barrios, 49, and Margarito Silva, 59, undocumented immigrants from Mexico who have lived in New York for more than 20 years, headed to the upstate base to celebrate the patriotic holiday with their pregnant daughter and Army sergeant son-in-law.

They presented their city-issued IDNYC cards at the gate but were told they weren’t acceptable — so they showed their Mexican passports.

The guards then called in Customs and Border Protection when they couldn’t find a valid visa, a base spokeswoman told Buzzfeed News.

The arrest came almost exactly a month after undocumented Ecuadoran pizza delivery guy Pablo Villavicencio was arrested by immigration agents while dropping off food at Brooklyn’s Fort Hamilton base.

One of the couple’s other daughters, Perla Silva, says both parents recently underwent surgery and need medical attention.

She says her enlisted brother-in-law, a sergeant in the 10th Mountain division, has been twice deployed to Afghanistan and is about to head off again.

“What’s clearly traumatic about this matter is that a son that is willing to give his life on the fields of war in Afghanistan is ripped away from his family here in America, that is appalling and unacceptable,” Brooklyn Borough President Eric Adams said at Wednesday’s press conference.

The incident has put new scrutiny on IDNYCs, which Mayor Bill de Blasio promoted heavily to undocumented immigrants as an alternative ID. Villavicencio also tried to show the Fort Hamilton guards one of the city cards before his arrest.