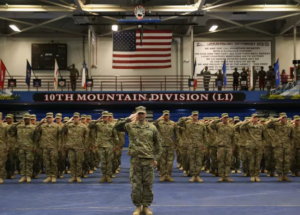 A couple of grandparents from Brooklyn who traveled to Fort Drum in upstate New York to visit their son-in-law on the country’s Independence Day—before he is shipped to Afghanistan for a third tour of duty—were arrested by immigration authorities and thrown into detention, a report says.

According to NBC’s New York affiliate, Concepcion and Margarito Silva, who are from Mexico but have lived in New York for two decades with a Department of Labor work permit, used their New York City IDs to enter the military base to visit their family member. But they were stopped by military police, who called Border Protection. Agents quickly arrived to detain the Silvas and take them to a federal ICE detention center “hundreds of miles away in Buffalo,” according to the report.

Fort Drum is located near the U.S. border with Canada.

The couple’s son-in-law is a sergeant in the U.S. Army’s 10th Mountain Division. According to the family, the Department of Defense won’t let him intervene in the case.

“Most worrying is the fact that both parents have recently undergone surgery and need medication,” the report said. “The Silvas say they have gotten calls from their mother, who said she was denied her medication. They say they have not heard from their father.”

“We don’t know what could happen to them in there,” Dulce Silva, a daughter of the detained couple, told NBC. “It would be crazy if they didn’t make it out of there.”

The incident happened one month after a pizza delivery driver was arrested by immigration authorities at Fort Hamilton in Brooklyn while working. On June 1, Pablo Villavicencio was delivering a pizza to the military base and used his New York City ID to enter, as he had done on previous occasions, when a soldier called immigration authorities on him. Villavicencio, who is undocumented, is married to a U.S. citizen, and the couple have two young daughters.