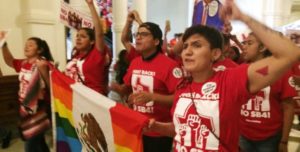 WASHINGTON – U.S. Immigration and Customs Enforcement has subpoenaed Denver law enforcement for information on four foreign nationals wanted for deportation and may consider expanding the unusual practice to other locations if necessary. It’s an escalation of the conflict between federal officials and so-called sanctuary cities.

ICE, the Homeland Security agency responsible for arresting and deporting people in the U.S. illegally, could take the subpoena to a federal judge, who can order them to hand over information and find them in contempt if they don’t comply, officials said.

But Denver, like many other jurisdictions around the country, will not hold any inmate beyond their release date in order for ICE to collect them because it violates their civil rights.

“We are reviewing the administrative subpoenas from ICE, which were not issued by a court of law,” said Theresa Marchetta, the director of strategic communications with the mayor’s office. “We want to be very clear that our immigration ordinance fully complies with federal law.”

Curbing immigration, both legal and illegal, has been a top priority for President Donald Trump, who has insulted Mexicans as rapists and murderers and who claims immigrants pose a safety threat, despite studies showing they commit less crime than non-immigrants. He has tightened rules on who can come, restricted who can receive public benefits and sent more than 50,000 people back to Mexico to wait out asylum claims.

The battle between sanctuary cities, localities that provide added protection to immigrants and refuse to cooperate with federal officials, and federal law enforcement has only escalated since Trump took office.

In 2017, then-Attorney General Jeff Sessions sent letters to 29 cities, metro areas, counties or states considered to have adopted “sanctuary policies,” saying those policies may violate federal law and threatening to withhold law enforcement grants. They eventually got the funds after courts chipped away at the threat. Thirteen states have enacted laws to allow immigrants to get driver’s licenses without proof they are in the U.S. legally, and some restrict data sharing with federal authorities.