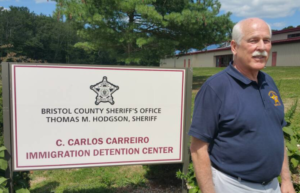 Days before Donald Trump’s inauguration in 2017, Bristol County Sheriff Thomas Hodgson offered to send local prisoners to build sections of the former president’s border wall. He made headlines railing against the idea of Massachusetts being a sanctuary state, and stood against cities that sought to protect immigrants from involvement with federal immigration officers. He even flew 2,100 miles to Texas to honor border patrol and talk shop about deporting immigrants.

It’s that kind of staunch, hard-line rhetoric, action and mentality toward immigration policy that Hodgson brought to the table over his four six-year terms in office, and it may very well be the thing that brought his downfall in Tuesday’s general election.

That’s when Attleboro Mayor Paul Heroux, a Democrat, squeezed by Hodgson with 50.6% of the vote to his 49.4%, a difference of just over 2,000 votes. Immigration advocates who have spent years suing Hodgson over alleged and proven mistreatment of prisoners are elated.

“I think it’s a big relief that Hodgson will no longer be returning as sheriff,” said Mario Paredes, an attorney who works at Prisoners’ Legal Services, an organization that has represented immigrants and prisoners filing cases against the county.

It is incredible that it took so many years for the community to also understand that there was a high price for keeping someone like Sheriff Hodgson in office,” said Ivan Espinoza-Madrigal, executive director of Lawyers for Civil Rights.

In 2020, Lawyers for Civil Rights brought a successful class action lawsuit involving overcrowding and unsafe conditions at the immigration detention facility Hodgson oversaw — resulting in the ability for prisoners released on humanitarian grounds to quarantine at home.

“That high price was paid time and time again by taxpayers who had to foot the bill when lawsuits were filed and wrongdoing was addressed,” he said.

Hodgson’s office released a statement to GBH News that said being elected sheriff and representing the public safety interests of Bristol County was the “biggest honor of his life.