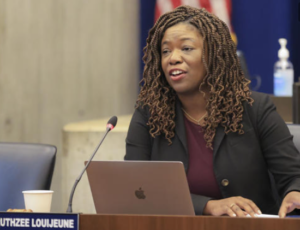 More than a dozen immigration advocates and community leaders pressed the Boston City Council on Monday for more resources and a stronger commitment to address a recent surge of migrants into the area.

“We can’t dial the clock back,” said Clare Louise Okalany, chief executive of African Community Economic Development of New England, during a council hearing. “It’s a new day for our families, Boston, and everyone who came here seeking peace, refuge, and sustainability.”

At-large Councilor Ruthzee Louijeune, who called for Monday’s hearing to inquire into how the city is handling the surge, said the arrival of migrants to Boston isn’t new, and the city could be better equipped to address the inflow of newcomers here.

“We have the capacity to make meaningful resources available,” she said. “We just have to find the willingness to do so.”

Monday’s hearing was held as immigration advocates have complained that a surge of thousands of migrants who have reached the Boston area in recent months have strained the area’s social services infrastructure.

Monique Tú Nguyen, executive director of the Mayor’s Office for Immigrant Advancement, said the scale of the impact in Boston is still difficult to measure: Migrants are arriving to Boston in smaller groups, and in different ways.

Unlike other major cities, “we’re not seeing [new arrivals] in buses and planes,” Nguyen said. “We’re seeing them in medical centers, transit stations, and nonprofit organizations.”

Like countless migrants before them, many of those arriving in Massachusetts now are fleeing economic fallout and political turmoil, and they come from nations like Haiti, Venezuela, Nicaragua, and Brazil.

With shelters at full capacity, Governor Charlie Baker’s administration has placed recent arrivals in hotels to meet the right-to-shelter law, which requires the state to provide housing to unhoused families. A statewide housing shortage has put further strain on assisting agencies.