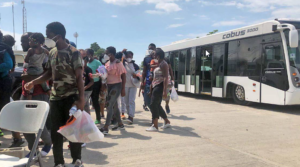 The re-designation and an extension would open up the immigration protection to tens of thousands of Haitians who arrived in the United States after July 29, 2021, when the last TPS designation was given following the assassination of the country’s president, Jovenel Moïse, two weeks earlier. It would also extend to those not covered by recent litigation over a Trump-era decision to terminate the program for Haiti and five other countries.

Last month, the administration announced that it would extend TPS protections for nationals of Haiti, El Salvador, Nicaragua, Honduras, Sudan and Nepal who had been temporarily living and working in the U.S. when the designation was challenged in a 2018 federal lawsuit, Ramos v. Mayorkas, DHS filed a federal notice announcing that the benefit would be extended, shielding those eligible from deportation until at least June 30, 2024.

On Thursday, several immigration and Haitian advocates stressed that the notice only covers a small group of Haitians currently receiving TPS, which shields beneficiaries from deportation, and noted that the administration has a Dec. 5 deadline to decide on the continued protection for Haitian nationals. But rather than extending it, they also want a re-designation, which would open up the immigration benefit to tens of thousands more Haitians in the U.S.

“Too often, we’ve seen Haitians having to wait for the very last day, of course, for an extension of TPS and this really puts people’s lives in limbo,” said Ninaj Raoul, founder and executive director of the Haitian Women for Haitian Refugees in New York. “They end up having to work a lot of informal jobs, to be able to put food on the table and support their family.”