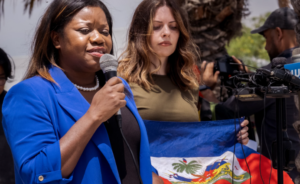 Beginning in April, after the Biden administration announced plans to terminate the controversial Trump-era immigration policy known as Title 42, immigration attorney Lindsay Toczylowski spent weeks telling migrants that they would finally get a fair shot at asylum.

“We had been telling them that May 23 was the day when hope was on the horizon,” Toczylowski said. “It was the day that the racist and xenophobic Title 42 policy was set to be lifted.”

But instead the day dawned with another unfulfilled Biden promise on immigration policy. A federal judge in Louisiana appointed by former President Donald Trump blocked Biden’s order.

Ruling in a case brought by Texas and Arizona, the judge said the administration failed to go through the required notice and comment process before terminating the policy.

Trump enacted Title 42 during the early days of the pandemic under the guise of public health. It allows border officials to turn away asylum seekers without a court hearing. It’s been used nearly 2 million times.

As a result, many migrants have been stuck in Mexican border towns where they end up being robbed, beaten, raped or kidnapped, according to Toczylowski and other advocates.

Monika Langarica, an attorney at the UCLA Center for Immigration Law and Policy, argued in court that it was unjust for two states to dictate federal immigration policy.

“Our argument is simple,” Langarica said. “Why should Arizona and Texas and other hostile anti-immigration states get to dictate national immigration policy for the entire border and the entire country?”

“That order will endanger thousands of lives of people who just want to seek asylum and protection for themselves and their families,” she said.

Haitian nationals continue to be among the most impacted by Title 42, advocates say. Over the weekend, the Biden administration used Title 42 to deport hundreds of Haitians from El Paso.