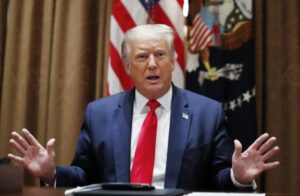 WASHINGTON (CN) — Immigration attorneys argued for nearly four hours in Washington on Thursday in a case that could decide the fate of thousands of immigrants shut out of the United States during the coronavirus pandemic.

The lawsuit challenges two sweeping presidential proclamations signed by President Donald Trump in April and June that closed the U.S. border to immigrants with few exceptions.

The first proclamation temporarily suspended the issuance of new green cards, while the second shut down the issuance of several types of nonimmigrant visas through the end of 2020.

The White House claimed the move was necessary due to the high unemployment rate brought on by Covid-19, but provided no data to support that lower numbers of immigrants would reverse the economic trend.

U.S. District Judge Amit Mehta heard arguments Thursday on a motion for a preliminary injunction filed last month that argued Trump must justify that entry into the country by certain foreign nationals would be “detrimental to the interests of the United States.”

The Obama appointee asked the government for data to support the finding that nonimmigrant visa holders would displace U.S. workers. But the Justice Department, while assuring the judge there was evidence on the record, could not provide any specific information.

Furthermore, the government argued, that type of finding is not necessary under the Supreme Court ruling in Hawaii v. Trump, which upheld the president’s travel ban on immigrants from predominantly Muslim countries.

But a lineup of immigration attorneys made the case that the two pandemic-era proclamations do not supersede the thousands of pages of regulatory requirements on visas outlined in the Immigration and Nationality Act.