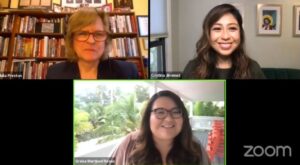 With two weeks remaining until the 2020 presidential election, leaders of the immigrant youth-led network United We Dream (UWD) discussed the history and future of their movement to expand protections for undocumented youth in an event called “DACA or Deportation,” hosted by the University’s Program in Latin American Studies. The discussion, held on Tuesday, Oct. 20, featured Cristina Jiménez, UWD’s co-founder and senior advisor, and Greisa Martinez Rosas, UWD’s executive director.

The organization is the largest of its kind, with more than 400,000 members nationwide. It rose to prominence in 2012, spearheading efforts that pushed the Obama administration to implement the Deferred Action for Childhood Arrivals (DACA) policy. Now, its leaders are making strategic decisions on how to approach the next administration.

The event’s moderator, Julia Preston, a contributing writer for The Marshall Project, began by discussing the significance of the upcoming presidential election in relation to the June 2020 Supreme Court decision that upheld DACA.

The decision ruled in favor of the University, Microsoft, María Perales Sánchez ’18, and other litigants challenging the Trump administration’s attempt to dismantle the program. But this decision does not mean that DACA is safe, Preston said.

“The court did not fully embrace the arguments that Princeton made in a full-throated defense of the DACA program,” she said. “The court ruled that President Trump did have the authority to cancel the DACA program. But the court said he just did it in the wrong way.”

The President can make more attempts to terminate DACA if reelected, Preston explained.

Even if Trump loses the election, the three Supreme Court nominees he brought forward during his first term could impact future cases on this issue. The Senate Judiciary Committee is set to vote on Judge Amy Coney Barrett’s nomination on Oct. 22, as Senate Republicans push to confirm Judge Barrett before Election Day.