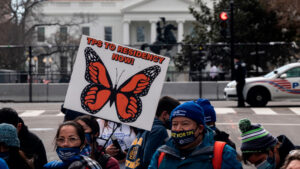 Immigrants who have time-limited permission to live and work in the United States under a program known as Temporary Protected Status (TPS) could be granted a pathway to citizenship under legislation proposed by President Joe Biden and congressional Democrats.

About 400,000 U.S. immigrants from 10 countries currently have TPS, which offers a reprieve from deportation for those who fled designated nations because of war, hurricanes, earthquakes or other extraordinary conditions that could make it dangerous for them to live there. Federal immigration officials may grant TPS status to immigrants for up to 18 months initially based on conditions in their home countries and may repeatedly extend eligibility if dangerous conditions persist.

The Trump administration had sought to end TPS for nearly all beneficiaries but was blocked from doing so by a series of lawsuits.

Under extensions granted by the Department of Homeland Security in recent years, the earliest that TPS status could expire would be in September for immigrants from Somalia and Yemen. TPS benefits are set to expire in October for those from El Salvador, Haiti, Honduras, Nepal, Nicaragua and Sudan. For TPS beneficiaries from South Sudan and Syria, benefits would expire in 2022. The deadlines for most groups were extended by the Trump administration; the deadline for Syrians was extended by the Biden administration.

The legislation proposed by Biden and congressional Democrats would allow TPS holders to apply for citizenship three years after receiving a green card, which is two years earlier than usual for green-card holders. Citizenship would be granted if they pass additional background checks and meet the usual naturalization conditions of knowledge of English and U.S. civics.