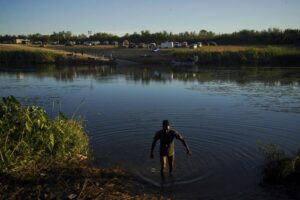 “I’d like to stay here in Mexico, but I’m scared because I don’t have permission to be here,” one immigrant told BuzzFeed News. “I don’t know what to do.”

The 35-year-old father weighed his options: head back into the US, where he could be sent back to Haiti, or stay in Mexico as authorities closed in around him and other immigrants.

Wood, who declined to give his full name out of fear of retaliation from the US or Mexico for speaking out, said he didn’t have a plan but needed to form one if he’s to take care of his wife and two daughters.

“I’d like to stay here in Mexico, but I’m scared because I don’t have permission to be here, Wood told BuzzFeed News. “But the US may deport us. I don’t know what to do.”

Like hundreds of immigrants who left the camp in Del Rio, Texas, this week in an attempt to avoid being flown to Haiti, the walls are closing in on them, this time from the Mexican side of the border. Immigration agents, flanked by armed soldiers and police officers, conducted day and nighttime raids on the streets of Ciudad Acuña, where they have been detaining and flying immigrants to southern Mexican states. For days, immigrants have been going back and forth across the precarious Rio Grande, moving to whichever side of the border seems friendliest.

On Thursday before dawn, Mexican immigration agents drove into the camp flanked by local police and the National Guard. The immigrants, most of them Haitian, who had been living at a park in Ciudad Acuña, were startled awake.