Home Resources Immigrants Waiting At The Mexican Border Are At High Risk Of Contracting The Coronavirus, Experts Warn 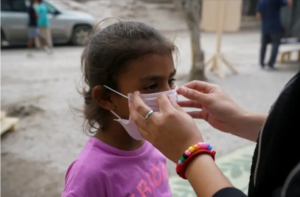 Health care providers south of the US–Mexico border are gearing up for potential coronavirus infections among immigrants waiting to make their way north, a population they say is at higher risk because of underlying medical and living conditions.

Helen Perry, operations director of Global Response Management, an organization providing free health care to hundreds of immigrants and asylum-seekers living in a makeshift encampment in the Mexican city of Matamoros, said it was very possible they could see a higher mortality rate than the 2.3% seen in a China-based study of 72,314 cases.

“We’re talking about a population that is moderately malnourished, consistently dehydrated, and constantly fighting some form of gastrointestinal infection from not great sanitary conditions,” Perry told BuzzFeed News. “On top of that, they’re in incredibly close living quarters, they’re essentially on top of each other.”

As of Tuesday, Mexico had 82 cases of COVID-19 compared to the United States’ 5,702, according to Johns Hopkins University. Still, access to public health services is generally difficult for Mexican nationals, Perry said, let alone immigrants.

The Trump administration has sent back some 60,000 immigrants and asylum-seekers to wait in Mexico while their US immigration cases are completed. The Migrant Protection Protocols (MPP), unofficially known as the Remain in Mexico policy, has forced thousands who decided to fight their cases to live in tents on sidewalks near international bridges, above the banks of the Rio Grande river, and overloaded shelters.

Even before the outbreak of the coronavirus, medical professionals like Perry were concerned about the health of immigrants living in these conditions. In some cases, when nurses and doctors with Global Response Management would refer immigrants living at the encampment in Matamoros to local hospitals, they would come back having not been properly tested or treated, Perry said.

That concern has grown with the realization that Matamoros doesn’t have the resources to deal with a large number of cases that could potentially need intensive care.