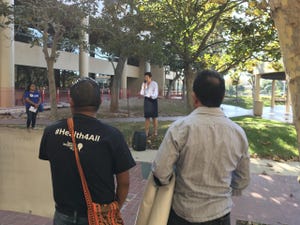 For the first time, an annual forum about local law enforcement’s interactions with U.S. Immigration and Customs Enforcement will include a presentation from an immigrants’ rights group.

Known as the TRUTH Act forum, the meeting is named for the law that required such events to take place. The forums have been held since 2018 when the Transparent Review of Unjust Transfers and Holds Act first went into effect and focus on the Ventura County Sheriff’s Office’s dealings with the federal agency.

Immigrants’ rights advocates have been a common sight at the forums, and they typically engage in public comment. Past forums convene before the Board of Supervisors with a presentation by the sheriff’s office.

For this year’s event Tuesday, more than 20 community organizations plan to attend as a coalition called ICE out of Ventura County, which is linked to the statewide effort ICE out of California.

The teamwork has been a crucial step for the local movement, which aims to implore the sheriff’s office to follow in the footsteps of other counties by ceasing all ties with ICE. Notably, the group has gotten a response from elected officials, giving coalition members hope for this year’s meeting, said Nidia Bello, a coalition member.

“We’re hoping to have a different outcome than the past forums. We’re hoping for that because we’ve been having a different level of engagement with supervisors,” said Bello, a policy advocate with the Central Coast Alliance United for a Sustainable Economy.

Prior to Tuesday’s meeting, the coalition also planned to submit a letter signed by hundreds of residents urging the Board of Supervisors to put pressure on Sheriff Bill Ayub to stop working with ICE, even on a limited basis, said Willie Lubka, another coalition member. They also plan to meet with sheriff’s officials in the weeks after the public forum, he said.