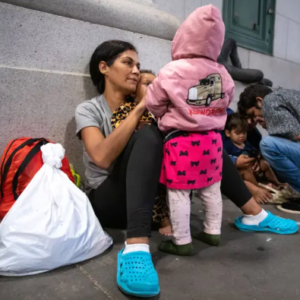 When thousands of people wearing surplus store armor storm the city, many carrying bear spray and weapons, many more shouting for the overthrow of the government, that’s the time to call in the National Guard.

When thousands of people come in on buses carrying their worldly possessions in a single bag, many holding crying babies in soiled diapers, many more with no shoes on their feet, that’s not the time for the National Guard.

This is how D.C. Mayor Muriel E. Bowser (D) is responding, months into the ongoing political stunt being played by two Republican governors who think it’s hilarious to score political points on the backs of vulnerable people.

She’s asking for the National Guard.

“With pledges from Texas and Arizona to continue these abhorrent operations indefinitely, the situation is dire, and we consider this a humanitarian crisis,” Bowser’s office said in a letter to the Secretary of Defense, asking for federal help.

In the past month, “the pace of arriving buses and the volume of arrivals have reached tipping points,” the mayor’s letter, obtained by NBC News, said. “Our collective response and service efforts have now become overwhelmed: the regional welcome center we helped establish in Montgomery County, Maryland is at capacity; our homeless services system is already under great strain; and, tragically, many families arrive in Washington, D.C. with nowhere to go, or they remain in limbo seeking onward destinations across the United States.”

They want to use the D.C. Armory as a processing center, staffed by unarmed personnel.

The aid workers who have been doing much of the work — greeting buses arriving at Union Station at all hours, getting the migrants clothing, diapers and food before working out the next steps on their paths to citizenship — are mostly horrified by the prospect of working with the military.