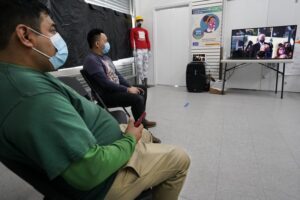 HOMESTEAD, Fla. (AP) — Immigrants cheered President Joe Biden’s plan to provide a path to U.S. citizenship for about 11 million people without legal status, mixing hope with guarded optimism Wednesday amid a seismic shift in how the American government views and treats them.

The newly inaugurated president moved to reverse four years of harsh restrictions and mass deportation with a plan for sweeping legislation on citizenship. Biden also issued executive orders reversing some of former President Donald Trump’s immigration policies, such as halting work on a U.S.-Mexico border wall and lifting a travel ban on people from several predominantly Muslim countries. He also ordered his Cabinet to work to keep deportation protections for hundreds of thousands of people brought to the U.S. as children.

“This sets a new narrative, moving us away from being seen as criminals and people on the public charge to opening the door for us to eventually become Americans,” said Yanira Arias, a Salvadoran immigrant with Temporary Protected Status who lives in Puerto Rico, a U.S. territory.

Arias is among about 400,000 people given the designation after fleeing violence or natural disasters.

“It sets a more hopeful future for immigrants in the U.S., but it all depends on the Congress, especially the Senate,” Arias, a national campaigns manager for the immigrant advocacy group Alianza Americas, said of the citizenship effort.

Success of the legislation is far from certain in a divided Congress, where opposition is expected to be tough. The most recent immigration reform attempts on a similar scale failed — in 2007 under then-President George W. Bush and in 2013 under then-President Barack Obama.