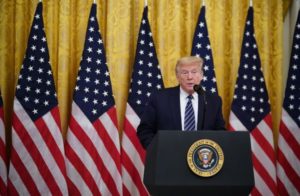 President Trump signed an executive order in April that temporarily halted immigration amid the coronavirus pandemic.

The president indicated that this move was to ensure that unemployed Americans would “be first in line” for jobs as they become available. His administration is expected to put a further hold on issuing new visas — the H-1B for highly-skilled foreigners and the H-2B for seasonal employment.

At the same time, new research from the National Foundation for American Policy (NFAP) found that H-1B visa holders don’t have a negative impact on U.S. workers. In fact, the presence of these immigrants in the U.S. is actually “associated with lower unemployment rates and faster earnings growth among college graduates, including recent college graduates.”

The study was based on data from 2005 to 2018 and looked at the impact of the number of approved H-1B petitions on unemployment rates and earnings growth rates in the respective occupations.

“If highly productive workers no longer can work in the United States, the U.S. economy as a whole is worse off,” the paper stated.“With the country facing a long and difficult struggle to emerge from the economic downturn, this is not the time to impose additional restrictions that would reduce the number of skilled, innovative workers in the United States.”

So why is that immigration is such a boon to the American economy and workforce?

H-1B workers account for at most 2% of highly educated U.S. workers, according to the study.

And by having an H-1B program, employers sometimes expand or at least maintain the number of jobs open to American workers. Furthermore, although some indicate that foreigners take jobs away from Americans because they are cheaper to pay, “the bulk of the evidence indicates that H-1B visa holders earn more than comparable American workers, on average, even before considering the substantial additional costs involved in using the H-1B visa category.”