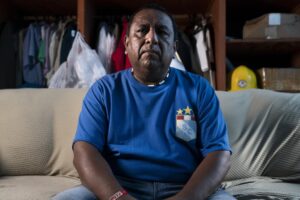 NEW YORK (AP) — Franklin Anchaua cleared thick layers of dust in offices, apartments and even in a chapel in lower Manhattan for weeks after the Sept. 11 attacks.

At first, he treated his heartburn and acid reflux with herbs his mother would send from Peru. He avoided available health programs because he lives illegally in the U.S. and feared deportation.

Until the discomfort was too much.

“It was awful. I needed medical treatment, a specialist. I also had breathing problems,” said Anchaua, 50, who sought care for the first time at Bellevue Hospital in 2011.

He and other immigrants, mostly Spanish-speaking clean up workers, have long asked to obtain legal immigration status in the U.S. as a way to compensate for the work and subsequent health problems they suffered after the attacks.

But 20 years after 9/11, only several dozens are still participating in protests and making the request, while others have abandoned that fight.

“It is hard to find a job here without immigration status,” Anchaua said. “Attorneys who helped us years ago told us we would get immigration papers but, look, 20 years have passed and we have nothing.”

Not as visible as those who worked on the World Trade Center rubble pile, some of these cleaners didn’t seek medical help immediately because they feared deportation, ignored how to navigate the application process or did not know help was available.

While some say they feel forgotten by the U.S. government, others returned to Latin America.

Hired informally by cleaning companies, they cleared debris, asbestos and dust inside lower Manhattan buildings for months without adequate protective gear. Some are struggling to cope with how the disaster transformed their lives, saying they are also treated for anxiety, depression and post traumatic disorder.

A few of them are organizing a small protest in October to push the government to establish a pathway for legal residency for immigrant cleanup workers.