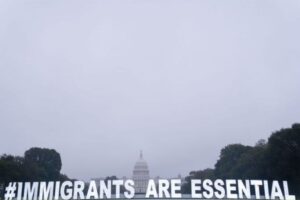 Democrats are pursuing a downsized option to provide relief from deportation to millions of undocumented immigrants through sweeping tax and social spending legislation.

The latest proposal to aid essential workers, “Dreamers” brought to the U.S. as children, and other foreigners in the country without papers would provide temporary work authorization and protection from deportation. It falls short of the pathway to permanent legalization and citizenship long sought by immigrants’ rights advocates.

The Congressional Budget Office is reviewing the “parole in place” plan to estimate its cost, and Democrats could present it to the parliamentarian as soon as next week, according to sources familiar with the discussions.

Democrats’ proposal would expand the Department of Homeland Security’s use of parole to include millions of undocumented immigrants, allowing them to apply for five-year work permits and subsequent renewals, sources familiar said. Immigrants with those permits generally would not be deportable.

An “Immigrants Are Essential” sign near the U.S. Capitol in Washington, D.C., on Wednesday, Oct. 6, 2021.
Parole status doesn’t include a path to legalization, but does open channels for narrow categories of applicants, including some relatives of U.S. citizens.

The Department of Homeland Security already uses parole for small groups of eligible immigrants, including close relatives of veterans and service members who apply for protection from deportation. A White House official hinted at the approach as an alternative to legalization last month.

Immigration Alternatives Lined Up if Democrats’ ‘Plan B’ Fails

The backup plan comes after the Senate parliamentarian, a staff attorney who interprets complex chamber rules, rejected two proposals to legalize millions of undocumented immigrants. She found the measures amounted to sweeping policy changes that didn’t qualify for the budget reconciliation process Democrats are using to pursue their agenda.