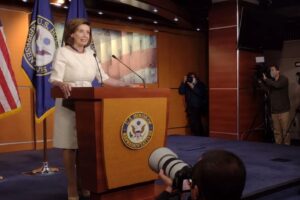 WASHINGTON, D.C. — Generations of Democratic candidates on the campaign trail have promised a pathway to citizenship to immigrants, and all failed to deliver once seated on Capitol Hill.

Likewise, generations of immigrant rights advocates have demanded a pathway to citizenship from Congress since President Ronald Reagan passed the last amnesty in 1986. All have come up short.

The hours-long meeting with Pelosi was the second for the three Hispanic Caucus Congressmen, dubbed the “three amigos” in a Univision segment that ran nationally on the nightly news.

At issue in both meetings were the immigration sticking points the three Congressmen were pushing to be included in a manager’s amendment of the Build Back Better Act (BBB), published days before by the Rules Committee in the lower chamber.

Several options were on the table at the beginning of last week, according to Hill aides involved in immigration negotiations who spoke with Latino Rebels under the condition of anonymity. But in the end, it came down to a decision over two: registry or parole.

Registry creates a pathway to citizenship by moving the current Green Card eligibility date forward from 1972 to 2010.

Immigrant parole does not create a pathway to citizenship, offering instead temporary permission to live, work, and travel to and from the United States for immigrants who qualify.

Pelosi pushed for registry until the very end, according to four sources involved in the negotiations last week. So did Senate Majority Whip Dick Durbin (D-IL), who leads the immigrant relief charge for Democrats in the upper chamber. Even moderate Rep. Josh Gotheimmer (D-NJ) expressed his conditional support for the registry option in the final hours of negotiations.